Go to the form

SeaDataNet is developing a Pan-European infrastructure for Ocean and Marine Data management. It is supported by the European Commission within the 6th Framework Programme as an Integrated research Infrastructure Initiative (I3). Its focus is to give users an integrated access to data, meta-data, products and services. Therefore it offers facilities for data quality control, perennial safeguarding, and stewardship, retrieval and dissemination to both intermediate users (value adding organisations) and end-users of a large number of multidisciplinary data (i.e. temperature, salinity current, sea level, chemical, physical and biological properties). These data are collected by many different sensors installed on board of research vessels, satellite and various platforms of marine observing systems. The data are managed by National Oceanographic Data Centres (NODC) and marine focal centres, that are partners in SeaDataNet. The SeaDataNet infrastructure will interconnect these data centres and will give in a virtual way central access to these data sets via the SeaDataNet portal. 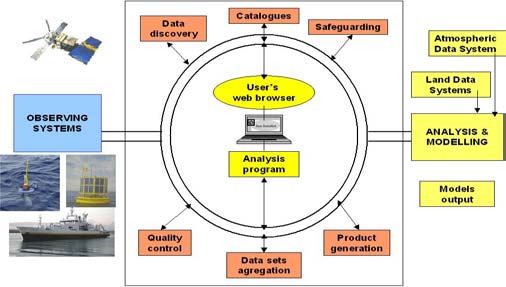 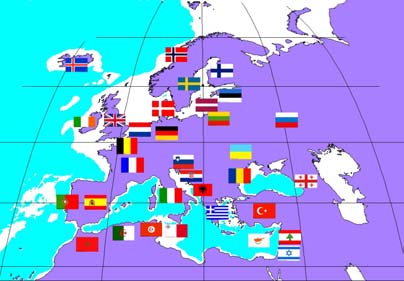 SeaDataNet is providing access to medatata, data, products and services through a central portal.

The SeaDataNet infrastructure is implemented in 3 versions: 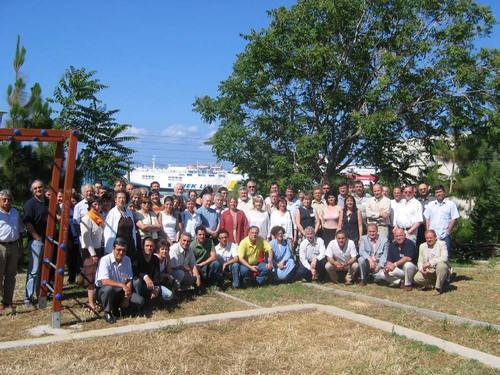 The First SeaDataNet Annual Workshop was held at the Abdus Salam International Centre for Theoretical Physics (ICTP) in Trieste (Italy), March 19-20 2007, kindly organized by the Istituto Nazionale di Oceanografia e di Geofisica Sperimentale (OGS). A total of 81 participants from partners institutes, advisers and observers from 37 countries (partners countries, USA, Canada and Australia) contributed. The objectives were to present the results of the first years work, to get feedback from the Advisory Board of Experts and to discuss the work plan for the next year.

Since the start of the project in April 2006 and its kick-off meeting in Heraklion that June, significant progress has been made. This includes the establishment of the project office, the project web site, communication and working tools. The SeaDataNet Technical Task Team (TTT) has made inroads into the development of the necessary communication standards, required for interoperability between the data providers. This work has involved many experts beyond the SeaDataNet community and is already recognised internationally. The result is a better harmonisation between the metadata catalogues CSR, EDMED, EDIOS and the CDI through development and adoption of common controlled vocabularies and standardised metadatabases for projects (EDMERP) and organisations (EDMO).
.
The TA data centres, which represent the backbone of the SeaDataNet infrastructure, continuously improved their level of standardised data processing procedures and services. The development of the Transnational Access Activities (TA) was illustrated by presentations from 8 selected data centres showing the progress these relatively young data centres have made, including incorporation of recent developments in information technology. To enhance the data management capacity in the TA centres and promote the adoption of the standards developed by the TTT, a series of Training Courses has been planned. The First Training session was organised in February 2007 at the IODE facility in Ostend, Belgium focussing on the use of the SeaDataNet metadata management systems (including Web Service technology), quality control (QC) methodologies for different types of data and usage of the Ocean Data View (ODV) software for data analysis, QC and visualisation.

Data availability and quality will be assessed with great attention to detail through the preparation of synthesised regional products. The specification for the first versions of these products was made taking into account a common kernel of parameters, spatial co-ordinates (IOC vertical standard levels) and temporal resolution (annual averages). Further local requirements, including additional parameters and spatio-temporal co-ordinates were taken into account. Product benchmarks were initiated from existing databases (WOA 2005, Medatlas 2002, ICES) in preparation for aggregation of the SeaDataNet data resource in the second year of the project.

The second year of SeaDataNet will focus on the operational release of Version 1 of the interoperable data system.  Interoperability within the project and beyond will be enhanced through the organisation of the second IMDIS Conference in Athens in March - April 2008 .

All the presentations made during the first annual meeting may be found on the project web site at:
http://www.seadatanet.org/meeting_annual1_trieste/trieste2007_presentations.htm 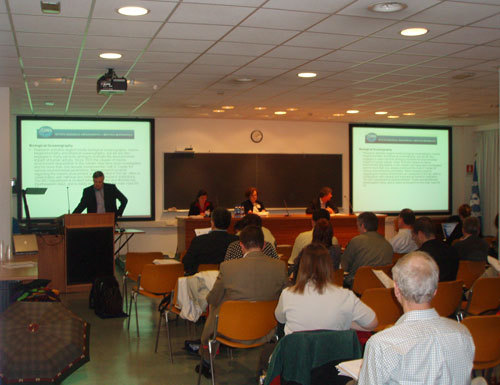 The SeaDataNet portal provides discovery services to identify and locate data sets and data collection activities through a range of metadata catalogues.

These metadata catalogues are continued from the previous Sea-Search project and have been updated by all data centres in the first year of SeaDataNet. Users can query these V0 metadatabases on the SeaDataNet website.

Each of these metadatabases has a different background. For SeaDataNet V1 one of the challenges is harmonising and achieving better interrelationships between the metadatabases. This is done by reviewing each of the formats, use of the common vocabularies and EDMO and EDMERP as common directories and by revising the XML schemas, that were originally designed in Sea-Search. The original XML schemas are already based upon the ISO 19115 metadata standard for geographical data sets, but by further harmonisation and better understanding of the ISO standards and XML tagging a more coherent and consistent set of XML schemas can be formulated, that will contribute to optimising the entry, maintenance and retrieval of metadata within SeaDataNet and towards other systems, because of increasing interoperability. These V1 XML schemas will be ready on short term and provide the basis for upgrading of the entry and retrieval systems. Then all partners will work on migrating the present metadatabase collections from V0 to V1, which should be finalised by early 2008.

The illustration below gives the planned structure and interrelationship between the metadatabases. Users can search for data acquisition activities (EDIOS, CSR, and EDMERP), for data sets (EDMED and CDI) and for involved organisations (EDMO). The results should point the way to a number of CDI records, that are describing specific data sets, which are of interest to the user. The CDI as such is the key linking the discovery services to the delivery services.

In its second year SeaDataNet will also provide added-value products to be created by the regional centres (Mediterranean, Black Sea, Baltic, Arctic and North Sea, Atlantic and Global ocean). First products will be gridded climatologies based on already available data-sets, mostly hydrographic data, to be updated during the project life. In order to make the products comparable, as a minimal requirement, all regional data centers will use a common tool for their spatial mapping. For this spatial data analysis, a new version of DIVA (Data Inverse Variational Analysis) has been developed and is now available on http://modb.oce.ulg.ac.be/modb/diva-4.0.zip .

This new version includes easier support for command-line versions and a TCL interface for scientists used to graphical interfaces. Both versions use the same calculation kernel which is now including improved calibration tools, more robust and faster mesh generators, a posteriori data-quality checks and production of error fields. Also calculations have been further optimised to allow for larger data bases and finer finite-element grids. The software can be installed under Windows and most Linux/Unix systems. Present developments include 3D extensions with automated removal of static instabilities in the analysed fields as well as space-dependant correlation lengths.

Minimal requirements on analysis to be produced and subregions for local analysis are also defined. For example, the minimal vertical resolution of analysis must include the standard levels from http://www.nodc.noaa.gov/OC5/readme.html and independent coastal analysis are needed in waters of class II. Further specifications are available through http://www.seadatanet.org

SeaDataNet Vocabulary Management Interoperability is the key to distributed data management system success and this includes establishing a common understanding of the terms that are used to populate metadata fields. This may be achieved through the use of controlled vocabularies containing keys, terms, abbreviations and essential (but often missing) definitions.

During Sea-Search, SeaDataNets precursor, centralised controlled vocabularies were set up to cover fields in metadata records such as the EDMED dataset description and the CDI data object description. The content governance (control of additions and changes) for these vocabularies largely fell to individuals and their technical governance (content change management and vocabulary distribution) comprised text files placed on FTP or web servers with no formal version management. Term definitions were rarely, if ever, present.

It was recognised at the outset that the Sea-Search content and technical governance would be insufficient for the needs of SeaDataNet. The British Oceanographic Data Centre (BODC) developed a vocabulary management system for the NERC DataGrid project based on an Oracle back-end fronted by a Web Service API incorporating automated version management and preservation of historic list versions. This has been adopted for SeaDataNet to cover the technical governance requirement.

Content governance was initially addressed through an e-mail discussion list within the SeaDataNet Technical Task Team. Whilst this was sufficient for subject material totally within the SeaDataNet domain, it was deemed insufficient for subjects with wider implications such as coverages, parameters, instruments and platforms. Consequently, an open discussion list (SeaVoX) was established under the joint auspices of SeaDataNet and the IOC MarineXML Steering Group to consider these broader vocabulary issues. SeaVox work is currently underway examining the Sea-Search vocabularies, defining terms and loading them into the server.

If you would like to see the lists currently available on the Vocabulary Server then web clients are available at:

Training and capacity building is an important component of the SeaDataNet project necessary for successful development of the project. The project training program has two main objectives:

The first SeaDataNet training course was held in 12-17 February 2007 (5.5 days) and it was focused on the first objective with the main attention on oceanographic data management: data re-formatting, quality control, processing and presentation of core in-situ data types by using Ocean Data View software. It included also intensive project metadata and related web services training. The training was composed of several lectures and hands on exercises that were done by trainees on the dedicated PCs using their own example data sets or test datasets provided by the trainers.The training has been provided by the experts from experienced core European data centers: Ifremer (France), BODC (UK), AWI (Germany), HCMR (Greece). Trainees from 22 partner countries have Participated.

The training was organized by the IOC-IODE (IOC International Oceanographic Data and Information Exchange Programme) that is responsible for this project activity and that has a great experience in the oceanographic data management trainings. The training was held at the IOC Project Office for IODE (Ostend, Belgium) that has all necessary equipment and facilities. Each trainee had a possibility to use a training Pc or his/her own laptop connected to the broadband Internet and to the training server. 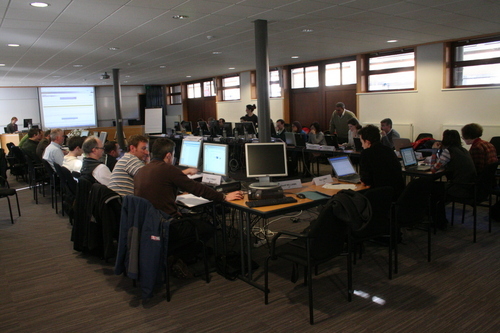 The Conference will be organised in four sessions:

Papers will be selected to present main topics and different technological solutions, promote discussions among different communities of developers and users.